A few of the Awards given to Sano and Thea Halo:

The Association of Greek American Professional Women (AGAPW) Thea Halo and Sano Themia Halo honored "For Your Profound Contribution to Literature and to Hellenic Cultural Heritage and History." May 22, 2012.

Thea and Sano were sworn in by Consul General Aghi Balta at the New York Consulate on June 11, 2009. In September, Thea and Sano traveled to Athens for a reception at the Hellenic Parliament with Dmitrios G. Sioufas, President of the Hellenic Parliament, and for a dinner reception with other important Hellenic Officials and members of both the Pan Pontian Federation of USA and Canada, and the executive committee of DISEPE. (See photos on the photo album page)

FOR vividly capturing the harrowing and haunting firsthand account of Sano Themia Halo's survival of the Turkish death marches following World War I in the memoir 'Not Even My Name';

FOR creating awareness of and documenting a catastrophic event in our Hellenic history;
FOR depicting a powerful tale of strength and triumph through personal adversity and destruction;
FOR receiving critical acclaim of 'Not Even My Name' from reputable media outlets and noted colleagues;
FOR excellence as a wrtier of poetry and prose, receiving numerous honors, distinctions,
and awards;

FOR her ingenuity as a news correspondent and radio producer;

FOR her appreciation of the fine arts and accomplishments as a painter;

IT IS with grateful appreciation and recognition, therefore, that the Order of AHEPA does herewith present to Thea Halo:

Represented by this scroll,

in the city of New York, New York

Letter from the Supreme President of AHEPA announcing awards

Congratulations! On behalf of the American Hellenic Educational Progressive Association (AHEPA), the largest association of Americans of Greek descent and Philhellenes, we are pleased to inform you that you have been selected to receive the 2002 AHEPA Homer Award to be given at the 80th AHEPA Grand Banquet on Friday, July 19, 2002, at the Hilton-New York, New York City. Cocktails begin at 6 p.m. and dinner at 7 p.m. The Grand Banquet is the pinnacle of events that are all part of the 2002 AHEPA Supreme Convention.

The Homer Award is one of the greatest accolades the Greek American community can bestow upon an individual. It serves to recognize an outstanding Hellene who has distinguished oneself as an author or writer. Past recipients include Dr. Mary Lefkowitz, Andrew Mellon Professor of Humanities, Wellesley College; and Author Nicholas Gage. Ms. Halo, your accomplishments as a writer, and specifically through your authorship of Not Even My Name, have been widely recognized by an international community, including such well-respected publications as The New York Times, U.S. News & World Report,

and Washington Post Book World; and colleagues such as Nicholas Gage. For this, we

Of course, we realize that no recognition can go without paying special tribute to the subject of Not Even My Name, your brave mother, Sano Themia Halo, to who we will proudly present the AHEPA Medal of Freedom.

Ms. Halo, AHEPA has been proud to host you at the chapter and district levels. We are, indeed, way past due in honoring you and your mother on an international stage. Also, we are pleased to offer the opportunity for a book reading and signing on Saturday, July 20, Noon, at the Hilton for our conventioneers.

The 80th AHEPA Supreme Convention is a special one for our members. We would be honored to have you as part of our celebration of 80 years of service to the Hellenic-American and Hellenic-Canadian communities. We anticipate a favorable reply.

Reprinted with the permission of the Supreme President Andrew T. Banis

"In Appricaiton to Thea Halo Author of Not Even My Name for her Contribution to Diaspora Hellenism."

WITH THE 2001 GOVERNOR'S AWARD FOR EXCELLENCE IN HONOR OF WOMEN'S HISTORY MONTH. 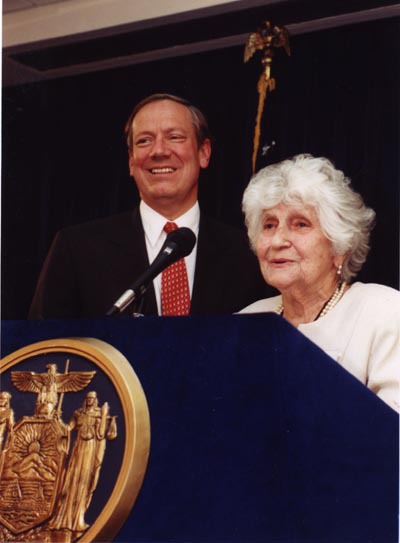 The annual observance of Women's History Month during March provides an opportunity to celebrate the achievements and contributions of outstanding New Yorkers. The recipients of the Governor's 2001 Award for Excellence have earned this richly deserved tribute.

Your story of survival defines the true meaning of courage. At the early age of 10, you demonstrated true strength of character when forced to leave your home and village in the Pontic Mountains of Asia Minor. Abandoned in poverty and given over to a family of strangers who demanded hard labor and changed your name, you were robbed of your Pontian Greek heritage.

After you were forced into marriage at the age of fifteen, you immigrated to New York City and set out to overcome life's challenges and achieve your dreams of a better life. Determined to succeed, you taught yourself to read and write, earned your United States citizenship and worked hard to support your family of eleven children.

Throughout this ordeal, you held on to the vision of relaying the story of your people. Through the memoirs captured in your daughter Thea's book, Not Even My Name, we all have a greater appreciation for Pontic Greek heritage -- one that was nearly destroyed by the genocide of your people during World War I. As the subject of documentaries and articles that preserve the history of the ancient Pontic Greeks in Turkey, you exemplify true heroism.

Approximately forty thousand Pontic Greek Americans in Astoria alone, as well as thousands more throughout our State and Nation, have you to thank for keeping the story of their rich heritage and tragic past alive.

Your meaningful contributions to your people are truly unforgettable.